After Santorini took our breath away at multiple corners and left us with very full tummies from delectable meals, we took a fast ferry this time to our next and final stop, Mykonos. Now Mykonos is seen as one of the party islands of Greece, and especially of the Cyclades. There were a lot of people getting off the ferry at Mykonos. We had heard that it is hard to get around the island, so we decided to rent a vehicle for most of the time we were there. I did most of the driving for various reasons and it was quite the adventure driving this small white Fiat up the steep hills of Mykonos. There were a few times I did not think the little Fiat wanted to make the climb, but it always did. Driving took constant surveillance as there were stretches of the road that only one car could pass at a time, and I never wanted to come too close to the giant buses or the weaving in and out ATVs and scooters. The latter group constantly seemed like they wanted to die by recklessly driving all over the roads.

Our hotel was situated atop a hill and down the hill was a beautiful beach that was not as touristy as many of the others on the island, which was perfect. It also had two cafes that–like everywhere else we went–had delicious food we could sink our teeth into throughout the day. What was crazy was the size of the cruise ships that would come and dock at Mykonos. They seemed larger than the island itself! 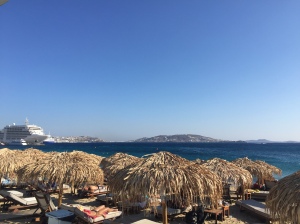 My good friend Julia from undergrad joined us for 48 incredible hours. I love Julia’s spirit of adventure, as I can always count on her to be willing to share in the types of decisions that great stories are borne from. We went out the night she came in to one of the mega party beaches, Paradise Beach. Driving there was filled with windy roads and lots of climbing. When we got there, we joined the party, but were quickly turned off from it as it was filled with far gone drunk Italian men mainly, who could not keep their drunken, sloppy hands off of any woman for more than .3 seconds. We tried dancing on a table top to keep away, but they were there on the table, hands waiting and groping. I do not want to dwell on this encounter for too long, as it was greatly upsetting and some place I never want to be a part of, but I will say that I did not leave without getting a few good slaps in on some drunk surprised faces. Once we got away from that mess (which we had been warned about), we ended up spending the rest of the evening partying with some guys from Canada who were traveling around the world for the year. It was a classic party night, that I had not had in some time, which is always nice in doses.

On Julia’s last night, we went to a gorgeous elevated, seaside restaurant, where I had the best salmon I have probably had in my life. The restaurant was in Mykonos Town, which is a quaint little town with beautiful intricate pedestrian streets and towering windmills. After scoops of decadent gelato, we finally made our way back to our hotel. 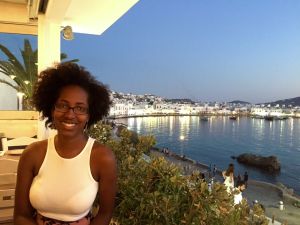 While a lot of our time in Mykonos was spent laying on the beach and eating more amazing meals at beautiful restaurants, we did have two more adventures. Imogen and i did an afternoon trip to the island of Delos, which is not far from Mykonos. The ENTIRE island is filled with ruins, and it was at one point, the most important seaport in all of the Greek city-states. I love history and hearing the stories of how they built things on the island, and the stories of Apollo and Artemis’ birth by Leto, who gave birth on the island that was created as a safe haven for her from Zeus’ jealous wife Hera. Although it was the hottest I had been since getting to Greece because there is no shade on the island, it was a highlight of the trip. 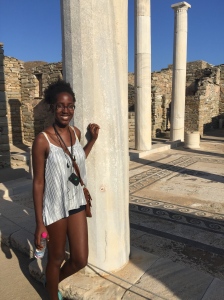 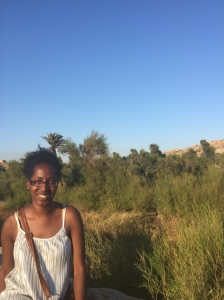 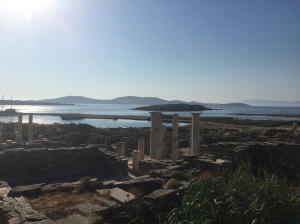 On our last evening with our car, we drove it up to the northern side of the island to see more sites. We went to an abandoned lighthouse that gave us breathtaking views of the island. That evening, back in Mykonos Town one last time, I was able to meet up with my friend Kim, who I had not seen in two years. It was amazing to see her lovely face, and I am always astounded at meeting up with loved ones in far corners of the world.

I would not mind a house in Mykonos, and I saw some being built. It was sad preparing to leave after such a wonderful nine days of rest and relaxation and seeing places I had only previously dreamed of seeing. I had eaten to my hearts desire and drank in all the amazing views. And as I type this from my bedroom in Philadelphia, my wanderlust has already started creeping back up slowly. I cannot wait for the next travel adventure.