Throughout primary and secondary school, I did not know a time that my mother was not an active advocate for my education. This was not simple helicopter mom status, but rather the necessity to check teachers on their biases and insist that they gave me the same work as anyone else, despite the fact that I had far exceeded my white peers in academic results since kindergarten. My mother battled teachers who had fixed ideas about who I was and what I was capable of, as the lone Black family in a white school district.

I thought when I grew older I would escape the constant battle of being demeaned while striving for an education, but I experienced it too many more times in undergraduate and graduate school. I continued to encounter teachers, teaching fellows, lecturers, and professors, who readily operated within systems made to oppress Black people like me. It has made me extremely worried about our children, and over the years my heart has been broken by stories of lessons where Black children were forced to play slaves on auction blocks or police allowed inside schools to violently terrorize Black children. You grow up hoping that the generation behind you will live different realities, but the headlines for the education of Black youth remain the same. Education institutions are not being held accountable for the systems they uphold and the racist employees they protect.

On June 5, the governor of Indiana declared that the Confederate statues would be taken down in Indianapolis. A friend shared the post on her Facebook wall, which I liked. I then saw that the first post underneath it was from a white man on a tirade about how it was meaningless to take these statues down and it was like pretending these things did not occur in history and how people were “super-sensitive”. My background is in American history, and particularly studies around romanticizing of the Civil War, so I commented that there were places such as museums and history books that were better suited to discuss this and that if our schools had better history classes it would be something that others could recognize too. 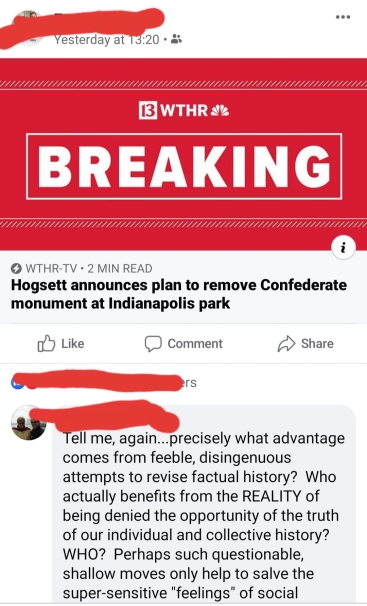 This man took issue with my first post about museums and history books and latched on to my use of the word ‘y’all’ to begin a racially charged series of attacks against me. He moved from belittling the way I talk to introducing a racist dog whistle of ‘tax paying citizen,’ and then finished off with remarks using mocking language (“I be a victim”) and saying that I came running to his dog whistle. 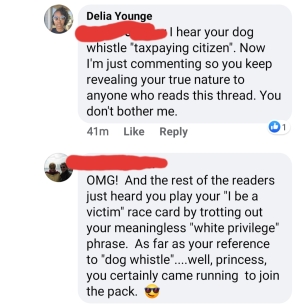 I was disgusted, but unsurprised, by this exchange. This was clearly a man who was used to talking to women like me this way without repercussion. And then I found out from my friend that this man was a professor , and then I found that he was currently a Lecturer in Ball State University’s Department of Management. This made me feel sick seeing once again in my life the ways that education institutions hire and hold space for individuals like this man. I reached out to the university with screenshots with the ask that the university take action against someone like this who was teaching on a campus that had Black students. Friends and acquaintances joined me in emailing the department, as well as tweeting them when I did not hear back right away. When I did hear back the response was wildly insufficient.

This response from BSU reminded me that not only do these institutions hire and hold space for men like him, but they also protect them. Ball State claims that the statements made by their employee are inconsistent with their values and commitment to DEI. Yet, they refuse to take any action because of what they see as suppression of free speech. I made no specific calls in my email to them about what should happen to their employee. My email to the head of the department was about action the university should take when provided evidence of employees who do not value people who are not like them. There is a failure in understanding that while the First Amendment protects freedom of expression, that does not make people exempt from the repercussions of their expression. We should especially care when that expression is to the detriment of Black students and other students of color. These are individuals tasked with supporting students in exploration of the world; helping them to learn new things and ask new questions. So what happens when the educators world does not include and honor Black students? What happens when they are writing their biases, prejudices and racism onto their curriculum, their grading, and their teaching?

Ball State, along with most institutions,  fails to recognize that racism is a mindset. One does not turn it off. What this man and others like him are doing outside of the classroom, they are most certainly bringing inside the classroom, from KKK rallies to not honoring differences in language. What good is a commitment to DEI if that commitment ends where your university internet server does.

The hypocrisy within education systems is palpable. If they want to create incompatible statements and commitments, then they must take responsibility for the racial harm done by their employees under their protection and watch. They do not get to say that because it is done outside of university name that it no longer represents them when they are faced with the reality of the pastime of their employee. When I shared this with BSU alums many started sharing about how this individual was the worst teacher they had and how complaints had gone unanswered. This individual signed on to a letter supporting a professor who had called the police on a student (probably because they would have as well), and was caught in another altercation where they belittled the language choices of a person of color. Ball State has made a choice. They have chosen to uphold the positions and voices of racist employees. White supremacy perpetuates itself when those in power enable others to recreate harm without addressing it. The police department is an excellent example of this. Other institutions have found ways to start expelling those who not see the humanity in Black people and other people of color, yet education remains in a role of active protection.

As this story continued to be shared online, I was contacted by a reporter from an Indiana news station and had to determine if I wanted to be interviewed by them or not. I had to ask myself why I would let someone else tell my story, when I was the best person to tell it myself. It pains me when I think about how my mother’s first reaction when I told her of this story was worry that he lived somewhere where he could hurt me. Black parents live in constant fear for the lives of their children no matter the situation.

But she is the reason I speak my truths. It’s time we all share our stories. I’ve been encouraged over the years to share mine from so many other Black people, whether it’s been through my current work in education or through writing and editing a book about the experiences of women of color at “elite” universities. I needed to write this myself so that the story did not focus on this one specific interaction, but rather be a condemnation of the entire system that upholds white men, white women, and others perpetuating white supremacy like this man at the detriment of Black students.

I often think about what it has meant for Black children to grow into adulthood. I am not convinced in a racist society that there are Black children who have gone through this system of education without harm enacted upon them. I grieve Black childhood. I want retribution for the marring of innocence. And I want change now.

We need K12 schools and universities to have more authentic commitments to racial equity. They instead hide behind First Amendment statements and large endowments. We need them to feel and breathe and ACT out their equity statements, and not just have them to put a Black face on their school pamphlets or tick a box. We are tired of being tokens and check marks.

Black people are capable of wholeness despite the racist structures of the education system. I am deeply grateful for the lessons of my mother. She taught me that my place in any classroom was not up for debate. She taught me how to hear the voice of my ancestors in my head and my heart to drown out the voices of the educators who refused to see my promise, my humanity. I am grateful that in a world that creates a million constraints for Black children, that my mother, like many other Black parents, are doing the work of unbinding. But it should not be their job to undo the harm of the education system.

I am done working around these systems.

It’s time for a reckoning in education.